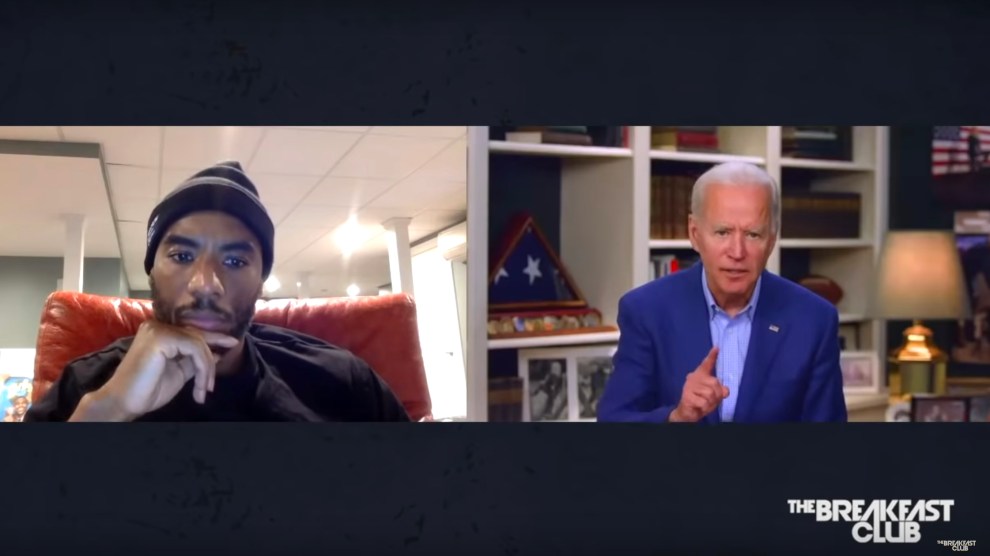 Presumptive Democratic presidential nominee Joe Biden went viral in a bad way Friday morning, when, at the end of a radio interview with The Breakfast Club, he told host Charlamagne tha God that “you ain’t Black” if you “have a problem figuring out whether you’re for me or Trump.”

Progressive activists quickly slammed the former vice president for trying to act like an arbiter on Blackness, while the Trump campaign and the president’s supporters cynically seized the comment, even selling T-shirts featuring it. Later in the day, Biden apologized. “I’ve never, never, ever taken the African American community for granted,” he said on a call with members of the US Black Chambers Inc., an organization promoting Black-owned businesses. He added that he “shouldn’t have been such a wise guy.”

But that comment wasn’t the only problematic part of his appearance on The Breakfast Club. Biden also made several misleading or downright false statements about his role authoring the 1994 crime bill and the impact it had on mass incarceration. The much-derided law contained a host of measures to prevent crime—including “three strikes” mandatory life sentences, extra funding for policing and prisons, an assault weapons ban, and the Violence Against Women Act—and is often pointed to as a factor that fueled the disproportionate imprisonment of Black and brown people in the United States.

During the interview, Charlamagne asked Biden about this criticism head on, pushing him on why he has been reluctant to admit that the law “was damaging to the Black community.” The host noted that Hillary Clinton went on the radio show during her presidential run and acknowledged the bill contained mistakes. Biden, though, doubled down. “She’s wrong,” he said. “It wasn’t the crime bill. It was the drug legislation. It was the institution of mandatory minimums, which I opposed.”

Eh. That assertion is only sort of true. Here, we fact-check five of his claims to set the record straight.

During his campaign, Biden has repeatedly argued that mass incarceration began before the 1994 crime bill passed. On The Breakfast Club, he reiterated that states lock up the vast majority of incarcerated people in this country, not the federal government. This is all true, but it doesn’t tell the whole story. And it’s not correct to say the 1994 bill played no part in fueling mass incarceration.

As Biden suggests, incarceration rates grew enormously before his bill passed—by 400 percent from 1970 to 1994, according to the Brennan Center for Justice. But they continued to climb afterward, too, doubling between 1994 and 2009. States did enact tough-on-crime laws and incarcerated many more people than the federal government did during that time. But Biden’s bill encouraged them to do so. As the Brennan Center’s Lauren Brooke-Eisen points out, the 1994 crime bill offered states $12.5 billion to construct prisons if they passed “truth in sentencing” laws, which required incarcerated people to serve at least 85 percent of their sentences. “By dangling bonus dollars,” she wrote, the law “encouraged states to remain on their tough-on-crime course.” As Vanita Gupta, who led the Justice Department’s Civil Rights Division under President Barack Obama, put it to the New York Times, the bill “created and calcified massive incentives for local jurisdictions to engage in draconian criminal justice practices that had a pretty significant impact in building up the national prison population.”

This, too, is only sort-of true. As the Annenberg Public Policy Center explains, there’s evidence that Biden did not support the three-strikes provision that made it into the final 1994 bill, because he worried it could put someone in prison for life for a relatively minor crime. In fact, Biden described the provision as “wacko” in 1994. But before the bill passed, he also went on the Today show and said he did support a three-strikes provision that would incarcerate people for life who committed “serious felonies…that are violent.” “We should take those predators off the street,” he said.

The reality here is more complicated than he made it seem. Biden may have spoken out against mandatory minimum sentences by the time the 1994 crime bill passed, but he was instrumental in pushing for them in the years before. As early as 1977, Biden advocated mandatory minimums that would force judges to send people to prison for a certain length of time, according to a New York Times investigation. Then in 1984, he spearheaded the Comprehensive Crime Control Act, which “added significant mandatory minimums for many federal crimes and abolished federal parole,” as the Brennan Center points out. (On The Breakfast Club, Biden argued that his intention with that bill was to erase disparities in sentencing lengths for Black and white people, “so nobody based on their color could go to jail longer than anybody else for the same crime.”) In 1986, he co-sponsored the Anti-Drug Abuse Act, which set mandatory minimums for crack cocaine offenses that were significantly harsher than sentences for powder cocaine offenses and disproportionately targeted Black Americans.

By 1993, Biden was starting to change his tune on sentencing. “I think we’ve had all the mandatory minimums that we need,” he noted during an event hosted by the US Sentencing Commission. He said some of the mandatory minimum sentences he helped pass previously were “not positive” and were “counterproductive,” according to the New York Times. While the 1994 crime bill did contain more mandatory minimums, it also included a “safety valve” provision that Biden backed, allowing judges to waive these sentences for certain types of offenders.

In 2008, Biden said the 100-to-1 ratio between crack and powder cocaine sentences was “arbitrary, unnecessary, and unjust,” and admitted that laws he helped pass were “part of the problem that I have been trying to solve since then.” In 2010, when Biden was vice president, the Fair Sentencing Act reduced the crack sentencing disparity.

4. “On balance the whole bill…it did in fact bring down violent crime.”

Crime was actually already dropping before the bill passed, by 10 percent in the three years before. Then, from 1994 to 2000, it fell another 23 percent, with violent crime dropping by almost a third.

But criminologists aren’t sure what exactly led to this change and if it can be attributed to the ’94 law. Brooke-Eisen of the Brennan Center argues the crime bill likely helped reduce crime to some extent—”not by locking people up, but by putting more cops on the street,” she writes. The bill “provided funding for 100,000 new police officers and $14 billion in grants for community-oriented policing, for example.” But she adds that “social and economic factors—like an aging population and decreased alcohol consumption—played a role in the crime decline as well.” John Worrall, a criminologist at the University of Texas at Dallas, told the Annenberg Public Policy Center that “the jury is very much still out” on what caused the drop in crime after the bill passed. “Criminologists and economists are in no agreement,” he said, citing theories ranging from economic and demographic changes to tougher sentencing.

5. “The one thing I opposed in that bill was people wanting to give money to state prisons to build more prisons. I opposed it.”

This is just false. Biden was clear in 1994 that he supported offering billions of dollars in funding to build state prisons. “We have not built new prisons to keep up with the increase in violent crime in America,” he said at a June 1994 committee hearing, according to CNN. And the bill, he said, “is partially our attempt to help the states and localities try.” At the time, he did say that Republicans were going overboard by proposing $10 billion in funding for state prisons. But he said $6 billion was an acceptable amount.

And that funding, of course, came with a catch. In order to get it, states had to pass those “truth in sentencing” laws mentioned above. Within three years, 27 states and DC had done so, paving the way to drastically expand their prison populations.