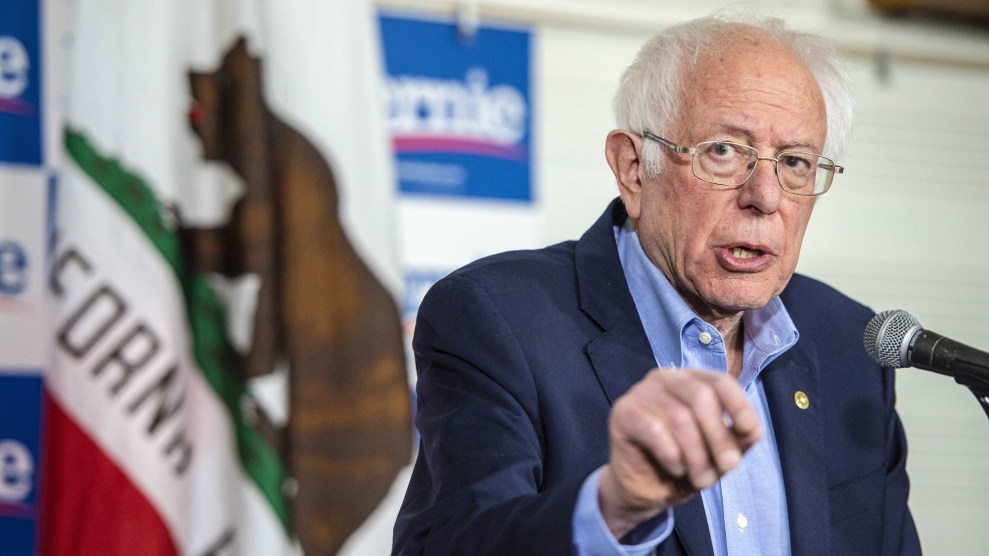 In the final weeks leading up to the Iowa caucuses, Bernie Sanders’ shoe-leather organizing machine descended upon the senior centers, retirement communities, and assisted living facilities that would be host to one of the state’s 60 satellite caucus sites. For the better part of an hour, surrogates would spend time with small groups to hammer home Sanders’ record on preserving Social Security and how his proposed improvements to Medicare could benefit a population already covered by the government program.

In the end, the effort didn’t make a ton of difference. Sanders only received 9 percent of support from voters over 65 in Iowa. And Sanders didn’t fare particularly well at those sites, either.

After Iowa, the campaign slowed its outreach to seniors, banking instead on younger voters who showed a natural affinity for Sanders. But the youth-led revolution never arrived, and on Super Tuesday, Joe Biden shellacked the Vermont senator on the backs of older voters. Now, to rescue Sanders’ candidacy, the campaign is making a late push to win over seniors, the age group most likely to vote.

Sanders has cleaned up with young voters, typically grabbing at least half of the under-30 set’s support in each contest. Super Tuesday was no exception: Exit polls suggest Sanders captured 58 percent of the votes cast by 18-to-29 year-olds earlier this week, compared to just 17 percent of those voters who cast their ballots for Biden.

But Sanders has struggled mightily with those over 65, picking up just about 15 percent of their support in contests so far. Biden, meanwhile, has scored big with voters on the far end of the age spectrum: On Super Tuesday, he walked away with nearly half of the votes from voters over age 65. Anecdotally, older Sanders supporters I’ve spoken with have told me that they love him because he represents the best vision for the next generation, not their own.

It’s not for lack of interest on Sanders’ part. Throughout his three decades in both the House and Senate, Sanders has repeatedly introduced legislation to improve Social Security benefits, including bills to tie benefits to the Consumer Price Index for the elderly; since the late 1990s, he’s led bus trips with seniors over the border to Canada to draw attention to the high cost of prescription drugs. “It fits into his conception of programs like Social Security, which are at the core of his belief, but also about how society abandons people and creates loneliness,” Ari Rabin-Havt, a senior adviser to the Sanders campaign, told me.

In the 2020 race, his suggested reforms to Social Security are far more aggressive than Biden’s: Sanders proposes increasing Social Security benefits by $1,300 per year for seniors with annual incomes less than $16,000, as well as raising the floor on the minimum benefits paid so low-income workers get a bigger share when they retire. Currently, Medicare does not cover long-term care, and Sanders’ revisions to the program under Medicare for All would do so. “We should do ads and mailers emphasizing that Bernie Sanders wants to expand Social Security and improve Medicare,” says Rep. Ro Khanna (D-Calif.), a national campaign co-chair. “We have a plan to deliver the most for seniors and we need to tell that story.”

Sanders hasn’t really been pushing that story of late. In the lead-up to the Iowa caucuses, he slammed Biden for his past support for cutting Social Security, critiques that rested on Biden’s 1995 vote for a balanced budget amendment that would have automatically cut Social Security and for leading 2011 debt-reduction talks with Republicans when Social Security’s cost-of-living adjustment was on the chopping block. Sanders released an ad featuring archival audio of Biden promising to freeze Social Security benefits—and a present-day Sanders promising to expand them. But since Iowa, there hasn’t been much.

Going forward, that changes. The campaign plans to return to those Biden attacks, now that the primary has come down to a two-person race; it released a new cut of his earlier Social Security ad on Wednesday. And the campaign is trying to revive the tactics it used in Iowa (even though that didn’t produce a noticeable electoral bump). Sanders will still do a characteristic big rally during his trip to Kansas City, Missouri on Monday, but he’ll fit in a town hall with seniors that day, too—a more intimate setting for Sanders to appeal to a population with less of an appetite for Sanders’ rock show-style events. While the elderly are less likely than their youthful counterparts to engage in typical organizing activities—like holding a sit-in at Nancy Pelosi’s office—there are still coalitions to tap into. Their plan includes appeals to local and state AARP chapters and making a concerted effort to do voter-to-voter contact with the 55-plus set, not just the 18-to-35 that’s been the primary focus so far.

Biden, of course, says he’d never consider Social Security cuts today and proposes securing the solvency of the Social Security program under his plan for “older Americans.” But in what’s suddenly a two-person race, the Sanders campaign hopes keeping attention on Biden’s past and Sanders’ plans could put a dent in Biden’s senior support.